By Gabriela Chavez, postdoctoral fellow, Auburn University based at the BecA-ILRI Hub 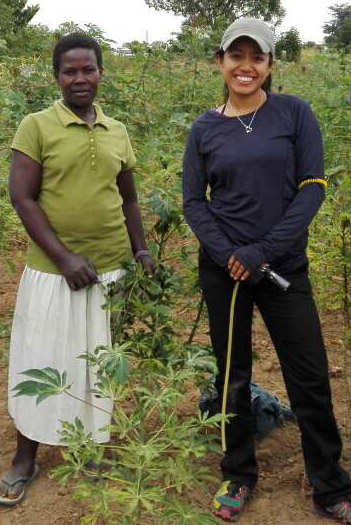 Gabriela Chavez poses with a cassava farmer in Kisumu, Kenya

I joined the Cassava Virus Evolution Project to study the most economically important disease in cassava in Africa. Like me, the cassava is indigenous to South America, but is now widely cultivated and adopted in Africa where it became one of the major crops for human consumption.

Cassava is a fascinating crop that is able to grow under drought conditions, high temperature, and poor soil conditions. However, its production in Africa is severely limited by viral diseases. The begomoviruses that cause Cassava mosaic disease (CMD) have a long evolutionary history in Africa, including the recent pandemic that spread across Sub-Saharan Africa in the 1990s and 2000s.

At the BecA-ILRI Hub I am studying how the whitefly influences the evolution of Cassava mosaic begomovirus (CMBs). Together with colleagues, I am analyzing the genetic makeup of a colony of whiteflies collected from the western part of Kenya in Kisumu and Lake Victoria surroundings. This is a critical component of the project because whiteflies exhibit an extremely high rate of differences within the species.

Working in Africa has been a life-changing multicultural experience. I have learnt that Africa is not all about catastrophes or poor infrastructure highlighted in news, but that there is on-going cutting-edge research and high-end technologies. I have also enjoyed the contemporary Kenyan music in English, Swahili and various local languages with intricate melodies that borrow from different styles of music from around the globe. I am also impressed with Kenyans’ ambitions and their spirit of entrepreneurship.