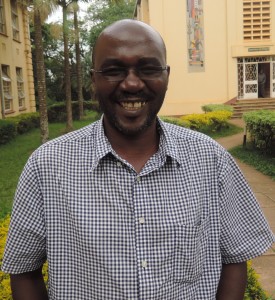 Dr Charles Masembe, Assistant Professor in the College of Natural Sciences at the Makerere University in Uganda

Dr Charles Masembe, an veterinerian, molecular epidemiologist and Associate Professor at the College of Natural Sciences, Makerere University in Uganda has been awarded a five-year Wellcome Trust Public Health and Tropical Medicine fellowship.

Building on discoveries he made while conducting research on genetic factors linked to the transfer of African swine fever (ASF) at the Biosciences eastern and central Africa-International Livestock Research Institute (BecA-ILRI) Hub, Masembe has continued to lead key research efforts on understanding the devastating viral swine disease.  African swine fever periodically kills 90-100 per cent of herds affected, threatening the thriving pig production industry in Uganda. Masembe will use the Wellcome Trust award to investigate the distribution patterns, and full genome characteristics that influence the maintenance and transmission of African swine fever at the livestock-wildlife interface in Uganda.

Masembe’s research at the BecA-ILRI Hub in 2010 and 2011, Masembe, shed light on the existence of the Ndumu virus in domestic pigs, a phenomenon which had not been previously observed. The virus had previously been isolated only from culicine mosquitoes. The results of his research will contribute to the development of effective control strategies for this disease that threatens the development of Uganda’s pig industry, the the largest and most rapidly growing pig production in eastern Africa with a pig population of 3.2 million.

Read more about Masembe’s research at the BecA-ILRI Hub: Viral metagenomics demonstrates that pigs are a potential reservoir for Ndumu virus