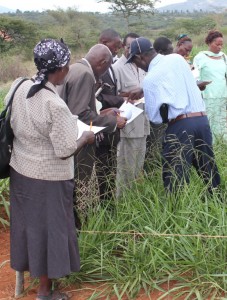 The inherent ability of Brachiaria grasses to grow in drought and marginal soils make them ideal forage for arid and semi-arid regions of East Africa. Native to Africa, Brachiaria grasses produce palatable and nutritious biomass and increase both milk and meat production. These grasses are good for the environment as they enhance nitrogen use efficiency, sequester carbon, reduce greenhouse gas emission and ground water pollutions. These attributes make Brachiaria one of the most widely cultivated forages in South and Central America, and Australia.

Despite their copious presence across sub Saharan Africa, these grasses are yet to be explored and fully utilized as forage on the continent. The implementation of the Swedish funded research program “Climate-smart Brachiaria grasses for improved livestock production in East Africa” which is led by BecA-ILRI Hub in partnership with International Center for Tropical Agriculture (CIAT); Kenya Agricultural and Livestock Research Organization (KALRO); Rwanda Agriculture Board (RAB); and Glasslanz, has led to the heightened publicity of the importance of Brachiaria grasses. As a result, there is now substantial interest in these grasses among farmers, policy makers and
researchers across the continent.

Kenyan farmers work with researchers to choose preferred local varieties for improvement
The enthusiasm of local livestock keepers was evident in the participation of more than 100 farmers from eastern Kenya in the project’s participatory variety selection process. This exercise was involved small scale farmers in the selection of Brachiaria grass varieties that best fit to their needs.
During the participatory varietal selection process, the farmers identified preferred varieties based
on their top five criteria – drought tolerance; soil erosion control; plant height at harvest; growth habit; and herbage colour. The selection took place at the project’s experimental plots situated at the KALRO – Katumani Experimental Station in eastern Kenya.

The participating farmers were representative of the 80% of milk producers in Kenya who operate
smallholder crop-livestock mixed farms on less than 10 ha and keep less than ten dairy animals. These farmers rely on fresh milk as an income source and are at pains to increase their production in a set up where natural grazing is limited or no longer available. Large scale on farm evaluations of selected Brachiaria grasses and livestock feeding trials in Kenya are planned to take place in
the next season. 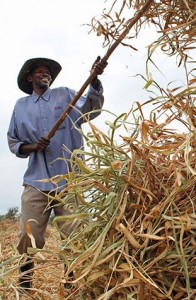 In Rwanda where land is under severe pressure from a rapidly growing population, farmers are experiencing difficulties in feeding their livestock. The average farm size in the country is among the smallest in sub-Saharan Africa at just over half a hectare, from which farmers must grow their
household food, cash crops and livestock feed. This has contributed to year round shortage of cultivated forages and resulted overuse and degradation of soils as well as decline in soil fertility.

Here, national partner RAB is working with Rwandan farmers to evaluate the performance of eight
different cultivars of this “wonder grass” which has been shown to increase milk and meat yields in cattle in South-America. The grass has proved popular among the farmers in Rwanda and farmer to farmer dissemination of grasses is happening with 33 farmers growing this grass at present. The initial feeding trials have demonstrated up to 78% increase in the milk production.

For information on the Brachiaria grass planting materials in Kenya and the field trials being coordinated by KALRO Katumani research center, call Tel: 0722206986