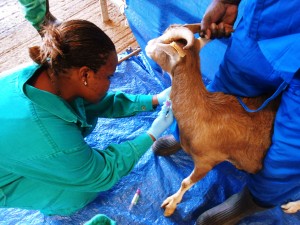 Sarah Osama takes blood samples from a goat in Ethiopia

Taking blood, tissue or hair samples for genetic analysis and at the same time doing physical measurements of livestock in the field can be a very hectic and time consuming activity.

This tedious but necessary sampling process has greatly been eased by the use of a sampling method (AdaptMap photo protocol and sampling kit) developed by United States Department of Agriculture (USDA). When I visited the villages of Haro Wolkite and Luma Tatesain in Ethiopia on a mission to investigate the genetic basis of goats in that region, I had the opportunity to test the sampling kit which had a slight modification made to it at the Hub.

Photo shoot
By taking photographs of the goats at different angles, we were able to deduce the physical measurements of the goats without struggling to pin them down. The process involved making markings on the animal’s pin bones which could easily be viewed by the photographer. An identifying card was then attached to the animal on which information such as the animal’s unique identity number, sex, birth date, owner, breed, sampling date, district/location, country and the distance from the camera was recorded.

A photograph of the goat’s eye with a color guide placed next to it was taken to determine the anemic state for the animal. This “famacha” guide has five levels of red and an animal giving a low score of 5 (very pale red) indicates the animal could be suffering from anemia. A photograph of the teeth helped us estimate its age while various profile shots were taken to deduce the pin bone width; the chest girth; height and length; and the points of shoulder width. All the information acquired from the photo shoot was recorded onto the card attached to the animal.
Finally, blood samples are drawn immediately after taking photos of each animal. The blood samples were labeled using the identity numbers given to the animals while taking the pictures for physical measurements.

Take and give
The farmers in the two villages visited were very cooperative with the researchers and gave extra assistance in managing the blood samples on FTA cards (cards developed for the collection and storage of DNA from organic samples), as they dried under the shade of a tree before storage. The farmers expressed their satisfaction with the minimal handling of their animals and in return for their cooperation in the sampling process they received on-the-spot diagnosis and treatment for worms based on the eye exam. Since the team included production experts, the farmers also received advice on better production practices.

This sampling exercise was part of the field activities being carried out by the BecA-ILRI Hub led team researching the genetic diversity of goats for improved productivity in Ethiopia and Cameroon.