“There is need for us, African scientists to design research to suit our own context so that we can get the real picture of what we have on our continent.”

This was the powerful message delivered by Getinet Mekuriaw, an Africa Bioscience Challenge Fund (ABCF) research fellow at the BecA-ILRI Hub, during the Sixth All African Conference on Animal Agriculture in Nairobi on 27 October 2014. Mekuriaw’s presentation titled “A review of genetic diversity of domestic goats identified by microsatellite loci from global perspective” was based on a paper authored together with five other scientists from the Addis Ababa University in Ethiopia, the Biosciences eastern and central Africa-International Livestock Research Institute (BecA-ILRI) Hub and ILRI. The paper was an evaluation of the research that has been done so far in establishing the genetic diversity of domestic goats globally. 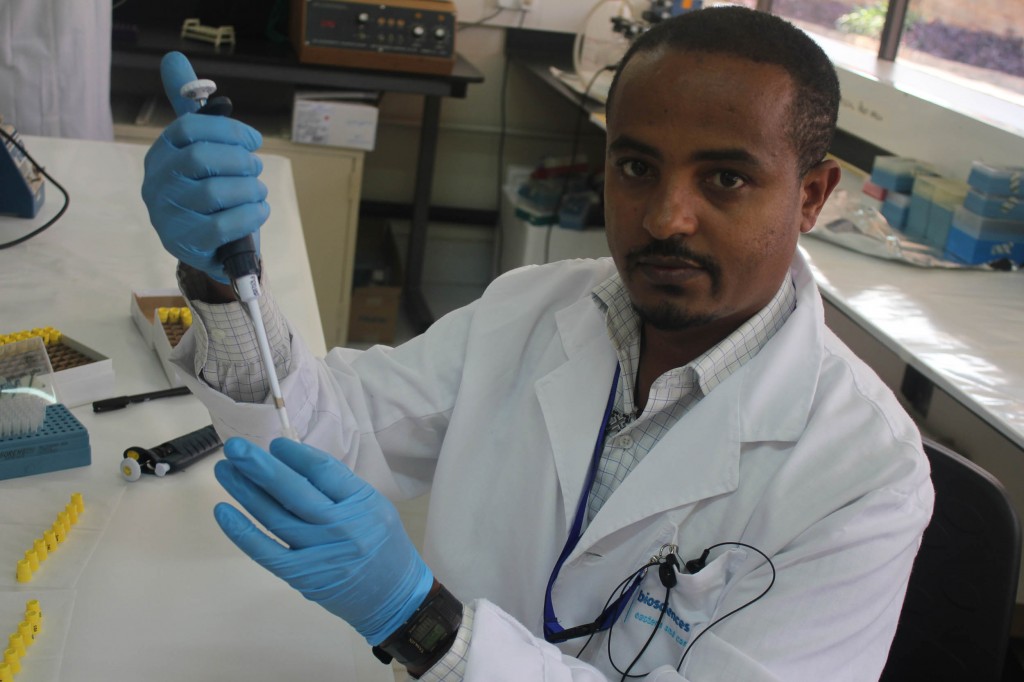 Genetic diversity holds the key to animal breeding and selection. Accurate information on the observable characteristics or traits of a species, their form and structural features and how this varies amongst different populations in a given region is crucial in the development of appropriate breeding strategies for the improvement and for the conservation of important breeds.

In Africa, the role of indigenous goats in smallholder livestock production is growing rapidly as keeping them is often the only practical way to use vast ranges of grasslands that cannot be used for crop production. There is evidence of local goat breeds being better able to withstand the increasingly harsh environmental conditions that come with climate change including higher temperatures, lower quality diets and greater disease challenge.

Unfortunately, not enough has been done to generate information about the genetic resources available and it is feared that many goat populations could disappear before they are even identified. Mekuriaw attributed the gaps in knowledge on goats globally, and in Africa specifically, to deficiencies in research methods. While it is indeed possible that there is low genetic variation between goat populations in Africa and beyond due to uncontrolled and random mating within flocks as well as huge population movement in between regions, inefficient technical and statistical data management have contributed to conclusions drawn from research so far.

Mekuriaw, a PhD student from the University of Addis Ababa in Ethiopia, is currently attached to the BecA-led research project “Harnessing genetic diversity for improved goat productivity” under the ABCF fellowship program. Through this component of his PhD research which is supervised at the BecA-ILRI Hub by project Principal Investigator Dr Morris Agaba, Mekuriaw hopes to establish the extent of diversity among indigenous goat breeds in Ethiopia. He also hopes to map out the genes responsible for growth and twinning and thus contribute to the establishment of a breeding strategy that will select goats for those traits. In addition, he is also developing a molecular tool, DNA profiling, which enables the determination of pedigree of the animals which will also be used in the establishment of the breeding strategy.

Mekuriaw’s research is helping the BecA-led project to achieve its overall goal which includes empowering goat breeders in Cameroon and Ethiopia to develop better goats suited to resource-poor farmers and to develop ICT based tools to support management decisions throughout the goat production chain.