Approximately 95 per cent of livestock keepers live in extreme poverty despite the increased demand for animal products such as milk and meat. While it is recognized that livestock keeping offers a promising opportunity to combat poverty in many developing countries, most livestock policies and services tend to favour large-scale production. 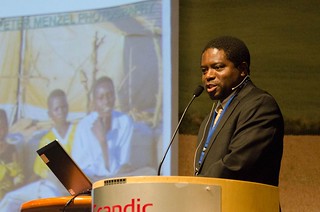 Join Appolinaire Djikeng, the Director of the Biosciences eastern and central Africa – International Livestock Research Institute (BecA-ILRI) Hub on 9 July 2015 during the fourth session of AgTalks as he gives his perspective on what it will take to reverse this trend.

Djikeng will be sharing his vision on why Africa’s untapped animal genetic diversity, particularly of mini livestock, holds the key to helping poor and vulnerable households in rural and peri-urban African climb up the livestock ladder out of poverty.

Djikeng is a strong proponent of capacity-building in Africa. His focus is on building the next generation of African scientists and tapping on bioscience to address agricultural development and public health issues. Djikeng has led the domestication of ruminant species in Africa, including the grasscutter, to create sustainable sources of protein.

About AgTalks
As a contribution to the International Year of Family Farming (IYFF), the International Fund for Agricultural Development (IFAD), a specialized United Nations agency and the only international financial institution within the UN family, launched the AgTalks series. IFAD is exclusively dedicated to investing in rural people and working with smallholder family farmers. The objective of AgTalks is to present the human face of family farming by sharing the latest policy research findings, as well as different viewpoints on smallholder farming.

Follow the proceedings and interact with the prominent guests  via webcasting.
Share your views and insights on social media with the #agtalks hashtag.